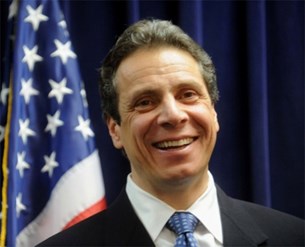 Andrew M. Cuomo, elected the 56th Governor of New York State on November 2, 2010, has a lifelong commitment to public service and the proven leadership skills to make government work for the people of the state.

Prior to his election as Governor, Andrew Cuomo served four years as New York’s Attorney General. As the state’s top legal officer, he made restoring public trust in government and protecting New York taxpayers the top priorities of his administration.

As Attorney General, Andrew Cuomo brought national reform to the student loan industry, uncovered fraud within the largest health insurers in the country, protected investors from abuses on Wall Street, and made the Internet safer for children nationwide. His groundbreaking investigations into the state pension system ended decades of government corruption in New York and set a model for public pension funds across the country.

Governor Cuomo has a long record of fighting for justice and championing government reform.

In 1997, Cuomo was appointed by President Clinton to serve as Secretary of Housing and Urban Development (HUD). Under his leadership, HUD was transformed from a bureaucratic backwater rife with waste, fraud, and abuse to a revitalized engine for economic development and unprecedented housing opportunities. Cuomo brought dramatic reforms to make government efficient and competent while saving taxpayers millions of dollars.

Andrew Cuomo’s work earned HUD the prestigious “Innovations in American Government Award” from the Ford Foundation and the Kennedy School of Government at Harvard University on three different occasions.

As secretary, Cuomo made fighting racial discrimination a key focus and brought 2,000 anti-discrimination cases all across the country.

In addition, Cuomo established Housing Enterprise for Less Privileged (HELP) in 1986, which became the nation’s largest private provider of transitional housing for the homeless. Based on his pioneering work through HELP, Cuomo was appointed by New York City Mayor David Dinkins in 1991 to lead the New York City Commission on the Homeless.

Cuomo first practiced law as an assistant district attorney in Manhattan. He has also worked as a partner in a New York City law firm and was of counsel at Fried, Frank, Harris, Shriver & Jacobson.

Cuomo graduated from Fordham University in 1979 and Albany Law School in 1982.

He is the father of three girls, twins Mariah and Cara and his youngest Michaela.