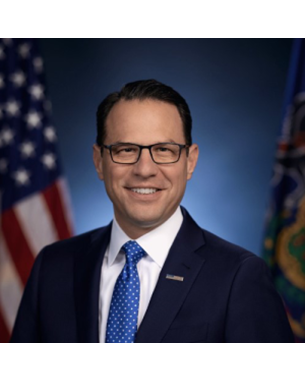 Josh grew up in Pennsylvania, watching his parents serve their community — his father was a pediatrician, and his mother was an educator. Their example inspired Josh to enter into public service, and from a young age, Josh recognized that standing up for others was how he wanted to spend his career.

After marrying his high-school sweetheart Lori and welcoming their first child, Josh returned to his hometown and successfully ran for State Representative. As Representative, Josh helped write and pass some of the toughest ethics laws in state history. His work earned him a reputation as a rare public servant willing to take on the status quo — “a blast of oxygen in the smoke-choked back rooms of quid-pro-quo Harrisburg.”

Then, as Chairman of the Board of Commissioners in Montgomery County, Pennsylvania’s third-largest, Josh led a fiscal and ethical turnaround. Before he took office, Montgomery County had a $10 million budget deficit and an underfunded pension for county employees. Josh put the county back on solid financial footing, took early steps to combat the heroin epidemic, helped the first LGBTQ+ couples in Pennsylvania marry, and fired Wall Street money managers to save taxpayers and retirees millions.

In 2016, Josh successfully ran to be Pennsylvania’s Attorney General. As AG, he has restored integrity to an office badly in need of reform and taken on big fights for the people. He has proven to Pennsylvanians he can bring people together to solve tough problems, and is unafraid to enforce the law without fear or favor.

Josh exposed the Catholic Church’s decades-long cover up of child sexual abuse, identifying 301 predator priests and thousands of victims — and spurring investigations across the United States. He forced an agreement between two of the Commonwealth’s largest insurance companies, protecting health care access for 2 million Pennsylvanians, and he has repeatedly gone to court to defend Pennsylvanians’ reproductive rights and a woman’s right to choose.

He has held more than 90 public officials, Republicans and Democrats alike, accountable for breaking the law. Working with law enforcement partners at the local, state, and federal level, he’s arrested thousands of mid- and high-level drug dealers while getting thousands of illegal guns off our streets.

During the 2020 presidential election, Josh protected the right to vote and defended Pennsylvania’s election result, winning in court dozens of times before and after Election Day. He continues to call out the dangerous lies that undermine our democracy and provide steady, strong, and competent leadership to protect voting rights in Pennsylvania.

In January 2021, Josh was sworn in for his second term as Attorney General. He’s arrested more than 6,000 drug dealers while investigating and suing pharmaceutical companies and the CEOs who knowingly perpetuated the crisis to line their own pockets. He’s standing up for everyday consumers, seniors who’ve been scammed, and students preyed upon by private lenders by obtaining over $328 million in relief to Pennsylvanians who have been ripped off. He is leading on criminal justice reform, bringing activists and law enforcement together to launch a new statewide police misconduct data-base, taking on employers who steal from Pennsylvania workers.

In November 2022, Josh made history as the highest vote-getter in Pennsylvania gubernatorial history. Alongside his running mate Austin Davis, Josh is ready to work with every Pennsylvanian to move our Commonwealth forward.

Josh and Lori live in Montgomery County with their three school age sons, and their eldest daughter attends the University of Pittsburgh.