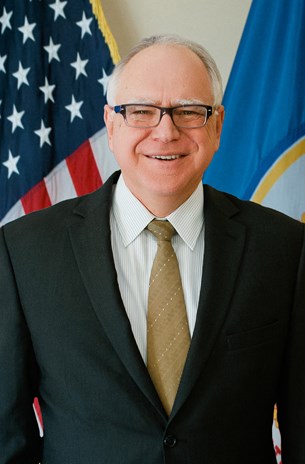 Tim Walz’s is Minnesota’s 41st Governor. His career has been defined by public service, from serving our country in the military to serving our students as high-school teacher and football coach to serving our state in Congress. As our Governor, Tim is working in partnership with Lieutenant Governor Peggy Flanagan to build One Minnesota, where we work across lines of difference to build a state that works for everyone.

Born in a small town in rural Nebraska, Tim’s parents instilled in him the values that guide his commitment to common good and selfless service. Soon after his high school graduation, Tim enlisted in the Army National Guard. Tim attended Chadron State College, where he graduated with a social science degree in 1989. Harvard University offered Tim an opportunity to gain a new perspective on global education by teaching in the People’s Republic of China in 1989-90, where he joined of one of the first government-approved groups of American teachers to work in Chinese high schools. Upon his return from China to Nebraska, Tim served full time in the Army National Guard, and accepted a teaching and coaching position. More importantly, he met Gwen Whipple, who was teaching at the same school.

Tim and Gwen Walz moved to Mankato in 1996, where they began teaching and coaching at Mankato West High School. In addition to teaching social studies, Tim helped coach the Mankato West football team that won the school’s first state championship. After 24 years in the Army National Guard, Command Sergeant Major Walz retired from the 1-125th Field Artillery Battalion in 2005.

Tim won his first election to the United States House of Representatives in 2006, and was re-elected for another 5 terms serving Minnesota’s First Congressional District. In addition to his work on the Farm Bill, the Lewis & Clark Regional Water System, Minnesota Highway 14, and the Minnesota State Veterans Cemetery in Preston (MN), Tim introduced the STOCK Act, a bill that sought to limit congressional insider trading. On March 22, 2012, the STOCK Act passed with overwhelming bipartisan support in both the House and the Senate.

After years of living in Mankato, Tim and Gwen moved to St. Paul with their two children, Hope and Gus, and their rescue cat, Afton.