The Conference of Great Lakes and St. Lawrence Governors and Premiers unites the chief executives from Illinois, Indiana, Michigan, Minnesota, New York, Ohio, Ontario, Pennsylvania, Québec and Wisconsin. The Governors and Premiers work as equal partners to grow the region’s $6 trillion economy and protect the world’s largest system of surface fresh water. The Conference builds upon over 30 years of work by the Council of Great Lakes Governors to encourage and facilitate environmentally responsible economic development. 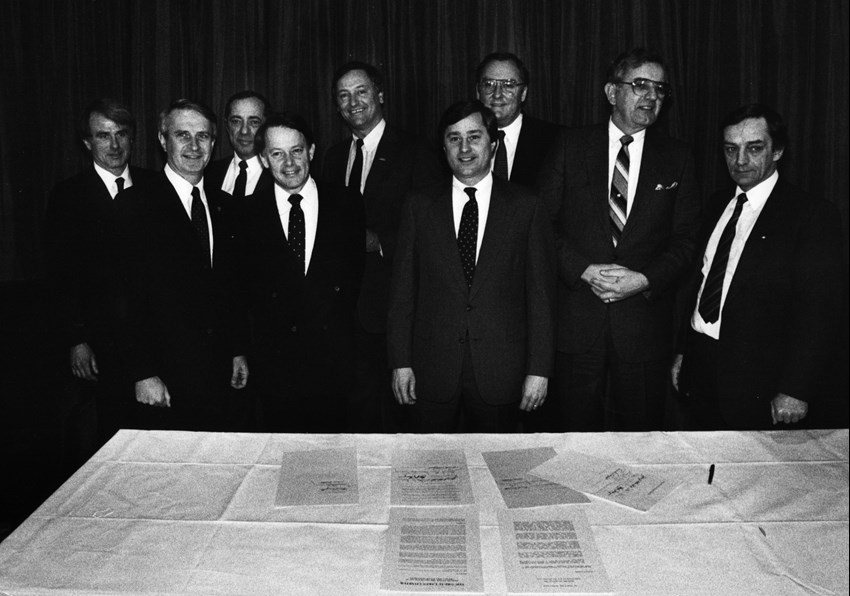 Signing of the Great Lakes Charter of 1985

One of the Governors’ and Premiers' central and common concerns is the protection and management of the region’s environment.  Of course, the Great Lakes and St. Lawrence are the primary source of the region’s freshwater and a superhighway that binds the States and Provinces to one another and connects the region to the world.  The Governors recognized that proper management of the lakes and the region’s environment was crucial to the health of our residents as well as the continued growth of our economy. The Governors also recognized that many environmental and economic issues could be more effectively tackled on a regional basis.  Consequently, the Governors created the Council of Great Lakes Governors.

The Governors launched the Council’s first projects under the chairmanship of Minnesota Governor Rudy Perpich.  Since its inception until 2009, the Council administered the regional biomass energy program under contract with the U. S. Department of Energy.  The partnership’s objective was to encourage increased production and use of biomass (basically any organic material) for energy generation.  Overall, through the Council the program brought over $13 million in federal money into the region.

A major focus for the Council in its early years was to better coordinate regional water policy.  Under the chairmanship of Wisconsin Governor Anthony Earl, in 1985 the Governors worked through the Council to create the first regional water management agreement among the Great Lakes States, Ontario and Québec—the Great Lakes Charter.  This historic agreement created a mechanism for regional collaboration, a guide for protective measures to be taken by each jurisdiction and an information-sharing component to improve decision-making.  It also marked the beginning of a long and fruitful partnership with the Premiers of Ontario and Québec, who are now associate members of the Council.

Also under Governor Earl's chairmanship, the Governors began to tackle the issue of improving Great Lakes water quality through the Council.  In 1986, the Council's Governors under the chairmanship of Illinois Governor James Thompson signed the Toxic Substances Control Agreement (TSCA).  As a result, the Governors later formed the Great Lakes Protection Fund in 1989.  The Fund was the first multi-State endowment dedicated to improving the environment.  The TSCA also led, indirectly, to the U.S. EPA’s Great Lakes Water Quality Initiative in the early 1990s. The Initiative set the regulatory structure for new water quality regulations.  The Governors coordinated their efforts through the Council when working with the U.S. EPA to ensure that new State water quality regulations were flexible, effective and compatible with the new economy that was growing in the Great Lakes region.

In the late 1980s, the Council’s effectiveness in solving collective concerns became more apparent.  At the same time, the Governors increasingly recognized the close relationship between the region’s environment and economic health. They also realized that collective concerns could be addressed both through multi-State agreements as well as through cooperative regional projects.

In 1988, under the chairmanship of Ohio Governor Richard Celeste, the Governors signed a regional Economic Development Agreement, marking a change in the Council’s orientation from an agreement-based to a project-based organization.  This Agreement outlined basic principles for the region’s development and led directly to several new Council projects.

In 1990, the Council opened the first-ever multi-State trade office in Toronto, Canada.  The purpose of this new shared trade office was to promote exports from the region’s small- and medium-sized companies and to reduce operational costs to the participating member States.  Based upon the success in Canada, under Pennsylvania Governor Tom Ridge’s and Ohio Governor Bob Taft’s chairmanships, the Council later opened shared trade offices in Brazil (1997), Chile (1998), Argentina (1999), South Africa (1999), Australia (2002), China (2003).  Offices also followed later in other key markets.

The Council also focused on pollution prevention projects over the next several years.  Through the Council’s Great Printers Project, printing companies identified strategies to reduce pollution in the printing process and become certified as Great Printers.  Separately, the Council’s Auto Project worked with the industry to reduce the release of contaminants throughout the auto supply chain.  The Governors also combined their market purchasing power to encourage the development of the recycled product industry.  Through this Great Lakes Recycle project, the Governors developed common specifications for State-purchased products made from recycled material.

In 1992, under Ohio Governor George Voinovich’s chairmanship, the Council sponsored a Carnegie Mellon University study to look at an integrated long-term strategic plan for the region’s economic and environmental health.  The study in turn led to several new projects.  For example, the Great Lakes Guarantee encouraged the adoption of regionally-certified skill standards which led to over 1000 Great Lakes workers being certified as having world-class metalworking skills.

In 1996, under the chairmanship of Pennsylvania Governor Tom Ridge, the Governors decided to build on their efforts to energize the new economy by addressing the legacy of the old economy.  Specifically, the Governors committed to work together to encourage the clean-up and redevelopment of the region’s brownfields.  Through the Council’s Brownfields Project, the Council published “A Blueprint for Brownfield Redevelopment” to provide information and strategic advice to break through the remaining barriers to brownfield redevelopment.

From 1986-2000, it became increasingly apparent that regional water management tools were incomplete and that enhancements were needed to more effectively manage the resource and avoid conflicts.  Perhaps most significantly, the Governors and Premiers sprang into action following a proposal to take water by tanker from Lake Superior for sale in Asia.  As a result, the Great Lakes Governors and Premiers partnered through the Council to develop the Great Lakes Charter Annex which was signed in 2001.  In it, they outlined the framework for a set of binding agreements among the Great Lakes States and Provinces to be created.  They also established a series of principles to be used to develop a new standard for reviewing proposed withdrawals of Great Lakes water.

Under the chairmanship of Ohio Governor Bob Taft and the co-chairmanship of Wisconsin Governor Jim Doyle, new regional water management agreements were developed and, in 2005, signed by the Great Lakes Governors and Premiers: 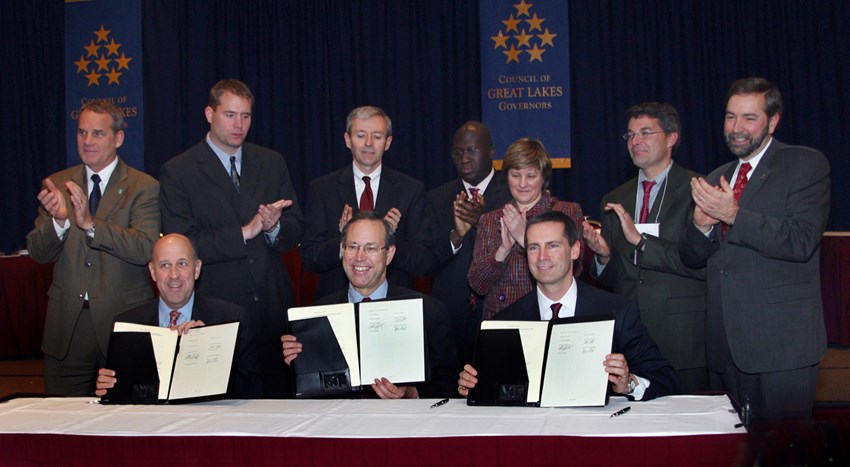 The agreements ban new diversions of water from the Basin with limited exceptions.  The States and Provinces will use a consistent standard to review proposed uses of Basin water.  And, each State and Province will develop and implement a water conservation and efficiency program.

While the Governors and Premiers worked to put in place long-term protections for the region's water supply, they also launched two complementary efforts focused on protecting and restoring the Great Lakes.  Together they launched the Aquatic Invasive Species Task Force in 2001. The goal of this Task Force is to stop the introduction and spread of aquatic invasive species (AIS) like the Asian Carp into the Great Lakes. Since its inception, the Task Force has coordinated State efforts to combat AIS through advocacy, coordination and the identification of best practices. 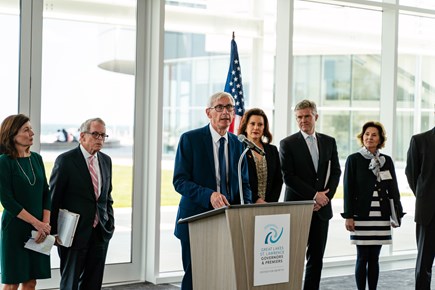 At the 2015 summit, Governor Snyder led the launch of the new Conference of Great Lakes St. Lawrence Governors & Premiers.  The Conference unites the chief executives as equal partners working to grow the region’s $6 trillion economy and protect the world’s largest system of surface fresh water.  The Conference builds upon the Governors' and Premiers' 30 years of work through the Council of Great Lakes Governors to encourage and facilitate environmentally responsible economic development.

Among the Conference's recent successes has been the launch of a maritime initiative focused on developing and implementing improvements to the region's maritime transportation system.  More generally, the Conference’s economic development projects continue to evolve and grow. A series of annual trade missions have assisted more than 600 regional companies to export their goods and services to more than a dozen foreign countries. The Conference has also worked creatively to attract foreign investment and promote the region as a destination for foreign tourists.