Doug Ford is the Premier of Ontario. He 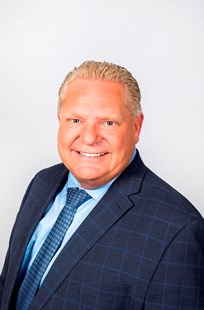 was also elected as the MPP for Etobicoke-North in 2018.

Previously, Doug Ford served as Toronto city councillor from 2010-2014, and was vice-chair of the Budget Committee, where he delivered hundreds of millions of dollars in savings for taxpayers. While on city council, Ford served on the board of Build Toronto, and was a director of the Canadian National Exhibition. He also served on the Civic Appointments Committee and the Government Management Committee at Council.

A dedicated community leader, successful businessman with Deco Labels and passionate advocate for the people, Doug’s commitment to public service runs in the family. Three generations of Fords have served the people of Ontario in elected office.

Doug is a life-long resident of the community of Etobicoke, and lives there with his wife Karla and four daughters. His commitment to public service includes over 20 years of dedicated work with the Toronto West Rotary Club and serving as a proud member of the Royal Canadian Legion.