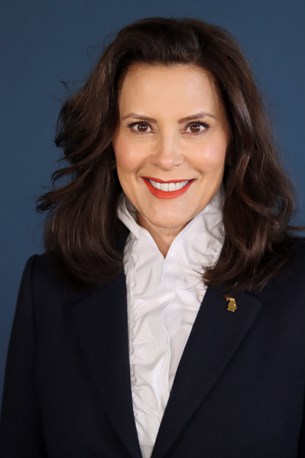 As Michigan’s Governor, Gretchen Whitmer is committed to solving problems for Michiganders across the state. Under her leadership, that means expanding access to affordable healthcare, improving education and skills training, respecting working families, cleaning up Michigan’s drinking water, and of course, fixing the roads.

Governor Whitmer’s experiences providing end of life care for her mother while giving birth to her first daughter solidified for her personally the need to ensure that all people have access to affordable, quality healthcare. As Senate Democratic Leader, she negotiated with Republicans to expand health coverage to more than 680,000 Michiganders through the state’s Medicaid expansion.

During her time in the Michigan Legislature, Governor Whitmer negotiated an increase in the minimum wage with a cost-of-living adjustment, and because of that bipartisan work, the minimum wage went up for the fourth time in 2018. As Senate Democratic Leader, she brought workers, labor unions, and businesses together to fight anti-worker legislation. She will continue that commitment to working people by improving education and skills training so every Michigander has a path to a high wage skill.

A proud product of Michigan’s public school system, Governor Whitmer believes in the importance of robust public education to ensure every child, no matter their zip code, receives a great education from cradle to career. During her time in the Legislature, she took on both parties when they tried to take money out of the School Aid Fund, and as governor she will focus on stabilizing school aid funding and improving accountability.

In addition to her service to the state, Governor Whitmer taught at the University of Michigan and Michigan State University, and in 2016 she stepped up to serve as Ingham County Prosecutor, restoring faith in the office after it had been hit by scandal. In that role, she established a new Domestic Violence and Sexual Assault Unit to go after abusers, sped up the rehabilitation of non-violent first-time offenders, and asked the Michigan State Police to investigate the integrity of the county’s evidence room.

A lifelong Michigander, Governor Whitmer grew up in Grand Rapids and East Lansing as the daughter of a “Frank Kelley Democrat” and a “Milliken Republican.” Her parents instilled in her and her siblings a strong work ethic and the deep belief that everyone is important. She started her first job at age 15 at Burlingame Lumber, and later worked the line at the Royal Fork Buffet and stocked shelves at Target.

Governor Whitmer has two daughters, Sherry and Sydney, and her husband Marc Mallory has three sons, Alex, Mason and Winston.